Vertigo is an erroneous sensation of movement. The definition of this term is relatively restrictive compared to its use in everyday language. Indeed, the word vertigo is used, for example, to define the fear of heights, when in fact it is acrophobia. Many other situations are described as vertiginous sensations: low blood pressure, metabolic disorders such as anaemia or hypoglycaemia. It is up to your doctor to try to define what might be related to the balance system, and to refer you to the ENT doctor in case of doubt.

The human being has had to adapt his equilibrium system by standing upright. It is not only a question of balancing on a narrow surface, the feet, but also of moving by rapidly changing the position of the body's centre of gravity in relation to the vertical. This requires a great deal of anticipation of the movement.

For example, the mere fact of putting the arm forward will cause an imbalance towards the front, but according to our sensory system, and our cerebral cortex, practically no tilting movement will be visible. This balancing system relies on 3 types of peripheral sensors which act in a joint but hierarchical manner: These 3 series of sensors will inform, after a complex but rapid pathway, the balance centres which are located in the cerebellum, and it is this same cerebellum which will instantly command the different muscles of the body to maintain balance, as well as the eyes, to allow the stabilisation of the gaze.

This is a very simplified diagram that allows us to understand the mechanism a little, but it is extraordinarily complex and the study of it continues unabated. (to go further) Anatomy of the Ear. The outer ear is the auricle and ear canal through to the tympanic membrane. The middle ear contains the ossicles and is connected to the pharynx by the auditory tube. The inner ear is the cochlea and vestibule which are responsible for hearing and equilibrium, respectively. This work by Cenveo is licensed under a Creative Commons Attribution 3.0 United States

The inner ear, as we have seen, is made up of the cochlea and the vestibule, which houses sensors for movements and acceleration of the head. There are thus 5 sensors per ear:

3 movement sensors which are the semicircular canals. They are made up of a canal filled with liquid, closed at one end by a flexible membrane, the cup, which deforms according to the movement. These cups are oriented globally in the 3 planes of space, their deformation triggers a nerve impulse.

2 gravity sensors, the macula and the utricle: to simplify matters to the extreme, these are crystals, the otoliths, located at the end of the cilia, which act like "plumb lines". Depending on the orientation of the head in relation to gravity, they will indicate where the vertical is, even with the eyes closed. If there is a linear acceleration, for example in a car, the head stays straight. The same applies to braking if it is not violent. The 5 sensors will trigger nerve impulses that pass through the vestibular nerve. The latter is "stuck" to the auditory nerve in its initial portion, then goes first to the vestibular nuclei, then to the balance control centre which gathers all the information from the other sensors: visual and proprioceptive.

We understand that this complex system requires perfect integrity. The slightest anomaly will disorganize the body's equilibrium in a more or less important and brutal way, either temporarily or for a long period.

ON THE CLINICAL LEVEL

When a balance disorder occurs, the ENT specialist's role is to

What are the means of diagnosis?

Of course the medical questioning is essential in the diagnosis of vertigo, it will make it possible to describe the felt symptoms, to study the antecedents, to specify the drugs taken.

The clinical examination always begins with an otoscopy, to analyse the eardrum, and then looks for a possible neurological disorder that could suggest a central origin.

to which we will add the V.H.I.T or Video Head Impulse Test, which allows the independent analysis of the 6 semicircular canals.

developed in France by Erick Ulmer, is the key initial examination to check vestibular function. It is based on the fact that the vestibule influences eye movement and that a dysfunction will lead to abnormal eye movements.

When you feel a sudden dizziness, everything is spinning around you, but it is not the ceiling that is moving or the objects around you, but the eye that is drifting under the influence of an abnormal stimulation of an element located along the vestibular system. This abnormal movement is most often formed by a slow phase of eye drift, followed by a rapid jolt of "re-centring" of the eye in the orbit.

The repetition of this movement is called a nystagmus. It is the direction of the rapid jerk that is taken as a reference, as initially it is easier to observe. With the advent of videonystagmoscopy it is a pity that this convention has not been updated, as it is the slow phase of this nystagmus that is actually of interest for localisation.

This nystagmus can be horizontal, right or left, vertical, superior or inferior, torsional, clockwise or anticlockwise. It can be spontaneous, i.e. present without any stimulation, or provoked by different manoeuvres or stimulations. There may be a combination of several nystagmus, and it is thanks to videonystagmoscopy that a detailed analysis of this ocular movement can be made and the side affected can be determined.

Videonystagmography is the recording of this eye movement with the help of computer software which allows the pupil to be located and the nystagmus to be analysed.

However, videonystagmoscopy only explores the semicircular canals, and more particularly the lateral canal. Other examinations can explore the other sensors of the vestibule:

2) The subjective visual vertical study, which analyses the utricle

3) Otolith evoked potentials, which explore the function of the saccule (for more information)

The Video Head Impulse Test was developed thanks to the work of Eric Ulmer. It is based on the stabilising role of the semicircular canals on the gaze, at high speed. While a high-frequency camera films the eye staring at a target on a screen, the doctor will give a rapid rotation impulse to the head. The rotation of the head in the 6 planes of the semicircular canals will also be recorded by the camera.

For a normal subject, the eye does not move from the target, whatever the movement given to the head. If a channel is affected, the eye will follow the movement of the head before refocusing on the target. It is this saccade that is analysed and that allows us to detect an anomaly of the semicircular canals.

This is a very interesting test, especially as it is the only simple test that allows an analysis of the posterior canals.

It has the added advantage of allowing the data to be recorded and plotted on a simple diagram. In green the vestibular responses are normal, in red the channel does not function properly In this case the left posterior canal is affected and the patient underwent an MRI scan following this examination. It showed the presence of a vestibular schwannoma or acoustic neuroma (white circled image) 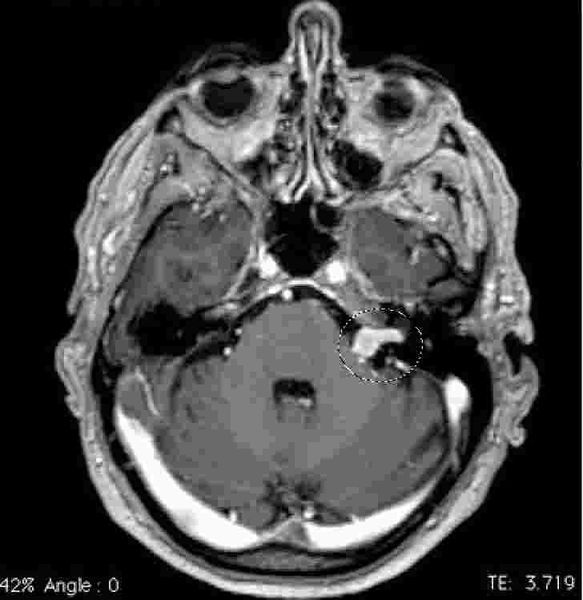 What are the most common causes

The medical encyclopaedia lists 72 causes of vertigo. We will not describe all of them, because in reality 6 major causes share the majority of vertigo cases. In order of frequency:

Alongside these main causes, there are other disorders linked to

We will deal with the main causes of vertigo in separate chapters.